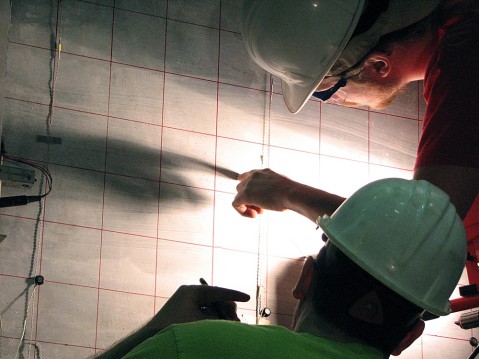 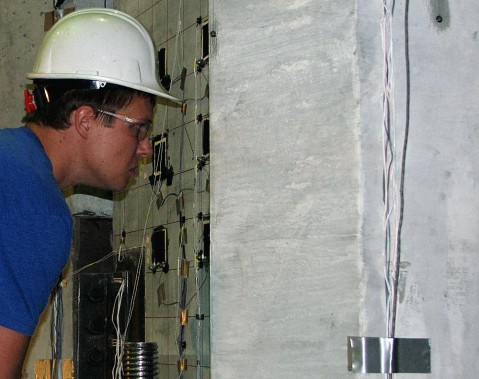 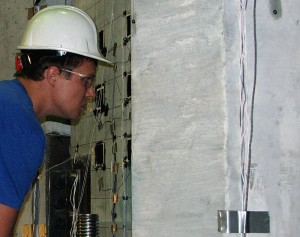 AMES, Iowa – Grant Schmitz, eyes inches from a 6.5-by-12-foot panel of ultra-high performance concrete, studied the smooth surface for tiny cracks. He and other research engineers carefully marked every one with black markers.

“We have definitely reached the limits of steel towers,” Sritharan said. “Increasing the steel tower by 20 meters will require significant cost increases and thus the wind energy industry is starting to say, ‘Why don’t we go to concrete?’”

And so, Sritharan and Schmitz watched as Doug Wood, engineering specialist and manager of Iowa State’s Structural Engineering Research Laboratory, typed in the commands for the lab’s hydraulic equipment to push or pull with bigger loads on a full-size test segment of a 100-meter concrete wind turbine tower. With each increase, the segment creaked and thumped.

The goal was to test three column-and-panel segments for the expected loads at the top of a turbine tower. The engineers wanted to see if the segments could handle 150,000 pounds of load, 20 percent over the extreme load at that height.

Sritharan and Schmitz designed the concrete towers to be built in hexagon-shaped segments, with six panels connected to six columns. They tested three methods to connect the panels and columns: bolted connections; horizontal, prestressed connections with cables running through the tower pieces; and a grout connection using ultra-high performance concrete poured into the joints between panels and columns. In addition, the concrete columns were attached to a foundation using prestressing methods. 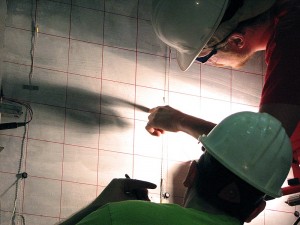 “Panel cracking was expected at very high loads and will be closed upon removal of the load,” Sritharan said. “This can also be avoided if this is requested by the industry.”

After all the testing, Schmitz said, “I definitely think we’re getting close to being able to use this technology in the industry.”

– increasing steel’s 20-year tower life by using ultra-high performance and high-strength concrete
– easier transportation because pieces are small enough for standard trucking
– precast concrete industry is established across the country
– less reliance on imported steel for turbine towers
– smaller precast pieces can be assembled on site in multiple ways
– the concept is versatile and towers can be tailored for any turbine size or even a height beyond 100 meters.


“What we have shown is that this system can potentially be deployed to a 100-meter height for a 2.5 to 3 megawatt system,” Sritharan said.

Moving from 80- to 100-meter towers is important for wind energy producers.

Sritharan said wind conditions at 100 meters are steadier and less turbulent. Taller towers also allow for longer turbine blades. Studies indicate all of that can increase energy production by 15 percent.

Sritharan said as turbine size increases, the need for taller towers will be inevitable.

“A lot of people are talking about taller, concrete wind turbine towers,” he said. “And we’ve already established a new versatile concept with multiple construction options.”

Sritharan said the studies of concrete turbine towers will continue at Iowa State. The project has been supported, in part, by a $109,000 grant from the Grow Iowa Values Fund, a state economic-development program. Industry partners in the experimental program are Clipper Windpower, a company based in Carpinteria, Calif., with a turbine design and manufacturing facility in Cedar Rapids; Lafarge North America Inc. of Calgary, Alberta, Canada; and Coreslab Structures (OMAHA) Inc. of Bellevue, Neb.

And Schmitz, who’s describing the project for his master’s thesis, could breathe a little easier after the successful testing.

“There is a lot of preparation for this,” he said. “We started coordinating the tests in August. We had to arrange for the precast and transportation and assembly through the fall. It’s definitely a relief when you see it handling the capacity it has to meet.”