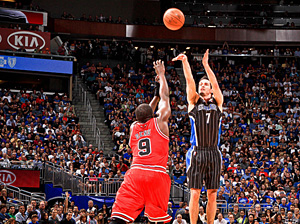 Thibodeau broke Avery Johnson’s NBA record for the fastest coach to 100 victories thanks to the Bulls’ 85-59 victory over the Magic on Monday night at Amway Center. That ran Thibodeau’s mark to 100-30, eclipsing Johnson’s record set with the 2006 Mavericks by one game.

The Bulls also improved to 19-6 on the road and 10-4 without Derrick Rose, who sat again with a strained groin.

They did so with a team effort that featured 24 points from Carlos Boozer, 20 from John Lucas III and defense that forced 19 turnovers and 35.3 percent shooting. Instead of records, those are the details on which Thibodeau focuses.

Then again, that’s the fewest points allowed in franchise history, besting the 62 points the Bucks scored on Dec. 5, 1997. There’s a record Thibodeau likes.

“I want to beat Orlando,” Thibodeau said. “That’s the only thing that matters. All that other stuff, meaningless. Stuff like that, it’s more a reflection of the team and organization. We have good players, great management, great ownership.”

Whether Thibodeau admits it or not, the Bulls have a great coach too. Just ask Magic coach Stan Van Gundy.

“There are a lot of great coaches in this league and a lot of people have done great jobs both last year and this year,” Van Gundy said. “But nobody — nobody — has done a better job than Tom has. And he’s probably doing even a better job this year than he did a year ago.

“With all the injuries they’ve had, they just keep rolling along. I said to my assistants the other day, they could probably have all five starters out and they’d still beat everybody. It just seems like they win no matter what.

“To me, they’re the best team in the league as far as a team collectively playing together, being unselfish, being committed defensively.”

Lucas jump-started a sluggish affair by burying three 3-pointers in 51 seconds late in the first quarter. He again got hot in the fourth.

No coach in NBA history has won consecutive Coach of the Year awards. Thibodeau will draw serious consideration to be the first.

Not that he cares about such details.

Layups: The Bulls aren’t expected to pursue Derek Fisher, who agreed to a contract buyout from the Rockets on Monday. … C.J. Watson, who is playing through a sprained left ankle, missed all eight of his shots.