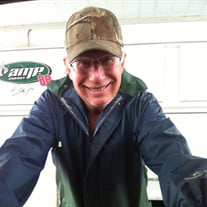 Jon was born on 8/17/1955 at Mercy Hospital in Mason City, Iowa and remained a resident of Mason City for the remainder of his life.

Jon met Donna Mae Madsen at the Clearview Roller Rink in 1969 and proceeded to spend the rest of their life together, marrying in 1974.

Jon worked at Wooz’s full-service gas station for his entire adult life. He was known for whistling tunes and providing smiles and laughter to his dedicated customers. The Globe Gazette did a feature story on Jon in 2012 detailing his many years of service and positive attitude at Wooz’s.

Jon enjoyed roller skating, bowling, and traveling over the years, particularly to Florida and Walt Disney World. Jon loved Christmas, and for years could be seen on Christmas morning wearing a Santa Claus suit outside their home on Highway 122, waving at passers-by.

Above all else, Jon loved and was most proud of his family. Attending all events and activities and providing the means for participation to his two daughters and son. He was a lifelong Mason City Mohawk and Hawkeye fan.

Jon is preceded in death by his parents Kermit and Lawisa McCorkle.