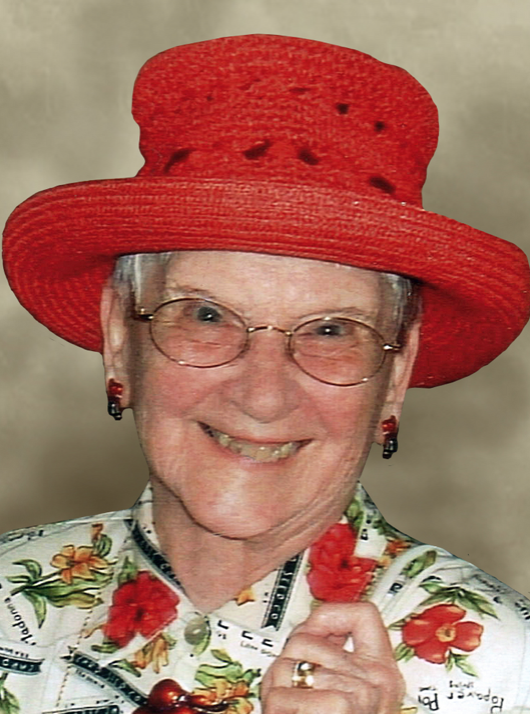 Winifred Eileen “Winnie” Mack was born on June 25, 1921, in Harcourt, IA to Walfred and Genevieve (Youngren) Johnson. She was baptized as an infant, and confirmed in the Lutheran faith at Bethany Lutheran Church in Laurens, IA when she was 13 years old.

When she was a young girl, Winnie and her family moved to Palmer, IA where her father was employed as an auto mechanic. Her mother also found work playing piano to accompany silent films shown at the Palmer Opera House. Of course, Winnie and her sister, Carol, went with their mother so were able to enjoy the movies as well! Winnie completed first and second grades at Palmer Public School, then finished third through eighth grades at a country school, as her family had moved to a farm west of Palmer. Winnie began ninth grade at Mallard Public School when the family relocated to a farm near Mallard, IA; she graduated in 1939.

Following graduation, Winnie moved to Dayton, OH with her aunt and uncle. There she took a position as a Civil Service secretary with the Army Air Force at Wright Field located there. She served in this capacity under Gen. K.B. Wolfe and Gen. Lester Miller from 1941 to 1945 during WWII. In 1946, with the war finally over, Winnie transferred to Hickam Air Force Base at Honolulu, HI where she met and married Jack Seybold of Cleveland, OH. They had one son, Shawn Steven. When the marriage ended, she returned to the United States and came back to Laurens. Using the office skills learned from her time in the military, Winnie was employed as secretary for a local manufacturing company. While working in Laurens, she met a gentleman by the name of Elmer Carl Mack from Pomeroy, IA. The couple was united in marriage on December 10, 1950, at Bethany Lutheran Church in Laurens.

Winnie and Elmer farmed the Michael C. Mack place for seven years, then moved to Pomeroy when Elmer accepted a position there with Thermogas. After 11 years, the family relocated with the same company to Hartley, IA until Elmer’s retirement in 1982. With working days behind them, Elmer and Winnie began thinking about milder winter temperatures, so in June of the same year, they moved to Cherokee Village, AR. The next 10½ years were spent relaxing, enjoying the scenery, and making new acquaintances. In 1992, they moved back to Hartley where they spent the remainder of their lives near old friends and familiar faces. Over the course of their 62 years together, Winnie and Elmer had traveled throughout the United States and Canada, seeing many wonderful places, yet it was always good to be back home. Her son, Shawn passed away in February of 2005, and Elmer, in March of 2013. Winnie continued to live at the home she and Elmer had made together in Hartley.

Winnie was a member of St. Paul’s Lutheran Church, and the American Legion Auxiliary Unit #288, both in Hartley. She served as the Hartley Bicentennial Chair in 1976 and was a member of the Hartley Centennial Committee in 1979. She contributed to her community by writing human interest stories for the Hartley Sentinel newspaper, not forgetting to point out all the wonderful things the city of Hartley has to offer for its residents. Knitting, crocheting, and sewing were among her many talents, as well as painting in acrylics. She enjoyed swimming, water exercise and going for long walks. And, yes, she did love to wear hats, and would do so on many occasions!

On Tuesday, January 17, 2023, Winnie passed from this life at the age of 101 years. She now joins her husband, Elmer; her son, Shawn; her parents; sisters: Barbara and Carol; brother, Wilbur and all their spouses; other relatives and many dear friends.

She is survived by many nieces and nephews and their spouses; other relatives and close friends.