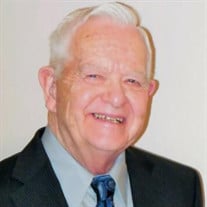 Darwin Pedersen, age 88, of Humboldt went to be with our Lord Wednesday, November 30, 2022 at the Baber Hospice House in Fort Dodge.

Darwin Pedersen, age 88, of Humboldt went to be with our Lord Wednesday, November 30, 2022 at the Baber Hospice House in Fort Dodge. Funeral services will be 11:00 AM Saturday at Our Saviours Lutheran Church in Humboldt. Military rites will be conducted by the Humboldt American Legion Post #119 and the Sather’s Odgaard VFW Post #5240. Visitation will be 10:00 AM until service time Saturday at the church. Services will be live streamed at https://www.hdezwebcast.com/show/darwin-pedersen

Darwin Andrew Pedersen, the son of Andrew and Essie (Gregersen) Pedersen was born September 28, 1934, in rural Gilmore City. He attended country schools and graduated from Gilmore City in 1953. Darwin served in the U.S. Army in Germany from 1954 to 1956. He married the love of his life, Evelyn Straw on February 26, 1956, at Trinity Lutheran Church in Humboldt. The couple farmed near Gilmore City and Mallard, Iowa until 1968. They lived in Webster City and later moved to Minnesota. Darwin worked as an agronomist and fertilizer plant manager for over 30 years until his retirement in 1997. Darwin served on several church councils and was a member of the West Concord, MN city council for 8 years. At retirement, the couple returned to Humboldt.

Darwin stated the best compliment he and Evelyn ever received was from his young granddaughter, Jessica who remarked, “You two laugh a lot!”. What an honor to be remembered for laughter and love.

Memorial contributions can be made to Upper Des Moines Opportunities – Humboldt County or to Our Saviour’s Lutheran Church, Humboldt Iowa.