MINNEAPOLIS, MINN. - Iowa (7-4, 5-3) defeated Minnesota (7-4, 4-4), 13-10, on Saturday at Huntington Bank Stadium to keep possession of the Floyd of Rosedale. The Hawkeyes are tied for first place in the Big Ten West Division.

MINNEAPOLIS, MINN. – Iowa (7-4, 5-3) defeated Minnesota (7-4, 4-4), 13-10, on Saturday at Huntington Bank Stadium to keep possession of the Floyd of Rosedale. The Hawkeyes are tied for first place in the Big Ten West Division.

A huge Minnesota turnover in the fourth quarter by Minnesota – an interception deep in Iowa territory – and then a big pass play when Iowa took over on the next play, led to the winning field goal in this ice cold slugfest. Iowa was robbed on the interception which was returned for a touchdown, but an official erroneously called the runner out of bounds.

The Hawkeyes have won eight straight over the Gophers and 18 of the last 22 meetings. Six of the last eight games have been decided by a touchdown or less.

LB Jack Campbell had a fourth-quarter interception following a DB Riley Moss pass break-up and he returned it 30 yards to the Minnesota 45 to set up Iowa’s game-winning field goal.

The pick is Campbell’s second interception of the season and fifth of his career.

Campbell had his third career forced fumble, jarring the ball loose from Mohamed Ibrahim in the fourth quarter with the Gophers driving in the red zone. DL Deontae Craig recovered at the Iowa 9 for his first career fumble recovery.

Campbell finished with 10 tackles – his seventh 10+ tackle game this season and 12th of his career.

Campbell is now 20th in school history with 287 career tackles.

QB Spencer Petras had a 1-yard touchdown in the first quarter. It is his second straight game with a touchdown, his third of the season and 12th of his career.

TE Sam LaPorta had a career-long 58-yard reception on Iowa’s first offensive play of the game. LaPorta finished the game with four catches for 95 yards before leaving the game with an injury in the first half.

TE Luke Lachey had a career-high five receptions to finish with 77 yards. His 33-yard reception in the fourth quarter was the second-longest of his career.

RB Kaleb Johnson had a team-high 43 yards on eight attempts. It is the fifth game this season he has led the team in rushing.

K Drew Stevens made a 38-yard field goal in the first quarter and the go-ahead 21-yard field goal with 31 seconds remaining. Stevens is 15-of-17 in field goal attempts this season. His 15 field goals are the most by a Hawkeye freshman in program history, moving past Mike Meyer and Nate Kaeding.

Redshirt freshman FB Eli Miller made his Hawkeye debut in the game.

The temperature at kickoff was 17 degrees at Huntington Bank Stadium, which is the second coldest temperature in stadium history.

It is the first time since 1929 that the defense has allowed 10 or fewer points in eight games. The 1929 team gave up 28 points the entire eight-game season.

Neither Iowa or Minnesota committed a penalty in the game.

Minnesota leads the overall series, 62-52-2.  However, the Hawkeyes have won eight straight and 18 of the last 22 meetings against Minnesota.

The Hawkeyes close out the regular season Friday, hosting Nebraska in the Heroes Game at Kinnick Stadium. Kickoff is set for 3 p.m. (CT) and it will be televised by BTN. If Iowa wins the game, they are the Big 10 Western Division Champions for the second straight year. They would face the winner of Michigan – Ohio State, whom play next weekend as well. Iowa seeks its 8th straight win over the Cornhuskers. The winning streak began in 2013 with a 38-17 win. Iowa beat Nebraska, 28-21, last season. 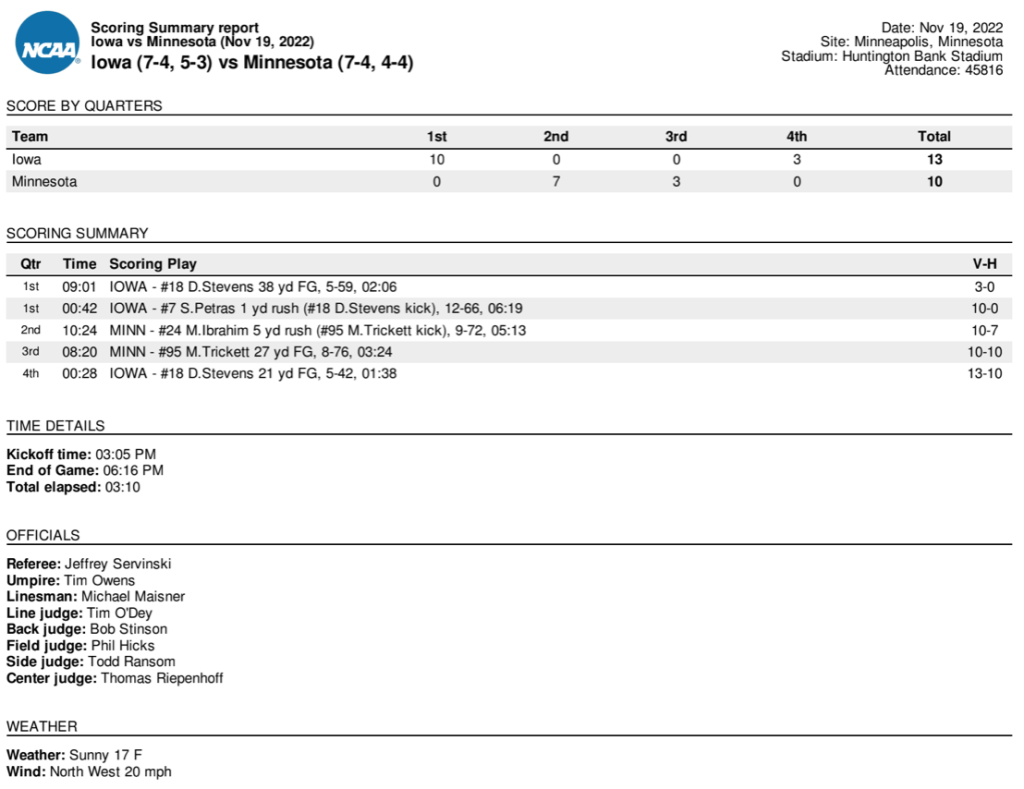