AMES - Texas Tech beat Iowa State, 14-10, Saturday night at Jack Trice Stadium in Ames. The Cyclones will not be bowling this season.

Dekkers finished with 294 yards on 23-of-35 passing for the Cyclones. Xavier Hutchinson caught eight passes for 101 yards.

Kickoff temperature of 22 degrees is tied for the eighth-coldest game in school history.

Eighth game this year with a 100-yard receiver, tying the school record set in 2019.

Iowa State has held every opponent this season under their season scoring average, as the Red Raiders entered averaging 33.8 points per game.

Hunter Dekkers
Moved into a tie for sixth in school history with 18 passing touchdowns this season.

Xavier Hutchinson
Has a reception in 36-straight games, tying Charlie Kolar (2019-21) for the second-longest streak in school history.
Passes Lane Danielsen (2002) for second on the single-season receiving yards list with 1,160 this year.
Seventh game this season with over 100 yards, breaking the school record set by Allen Lazard (2016) and
Hakeem Butler (2018).
Went over 100 yards for the 13th time in his career, breaking Allen Lazard’s record.
First player in the Big 12 with 100 receptions in a season since Devin Duvernay (Texas) in 2019.
Has at least eight receptions in all 11 games.
Moved into a tie for eighth in Big 12 history with 252 career receptions.
Second player in school history with multiple 100-yard games against Texas Tech, going for 112 last season.

Easton Dean
Caught his second touchdown of the season and second of his career.

Cartevious Norton
His third-straight game with at least 17 carries, tallying a career-high 19 against Texas Tech.

Gerry Vaughn
Moved into a tie for eighth in school history with 51 career games played. *Tallied a career-high 11 tackles.

Iowa State travels next Saturday to face undefeated and #4 TCU to conclude the season, as the Cyclone will not be bowling this year. 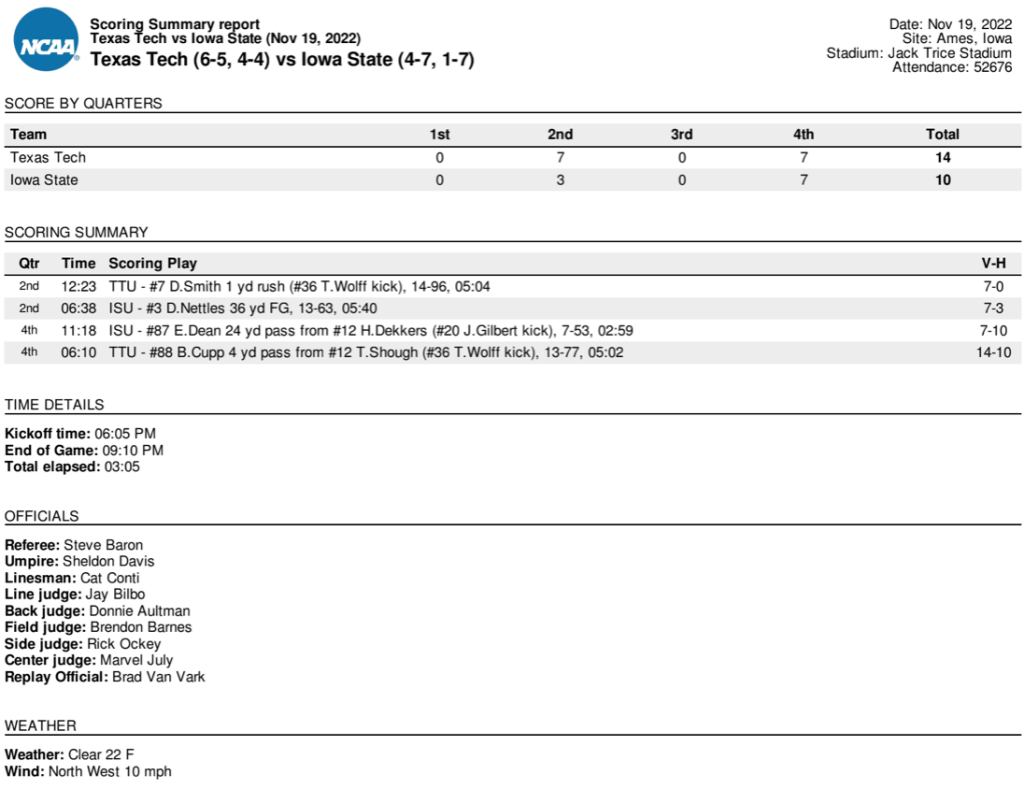