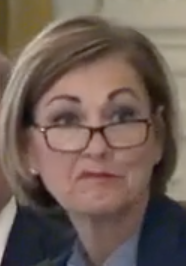 DES MOINES - Today, Gov. Reynolds announced that chief of staff Sara Craig Gongol is departing her role and that Taryn Frideres will become chief of staff.

DES MOINES – Today, Gov. Reynolds announced that chief of staff Sara Craig Gongol is departing her role for another opportunity and that Taryn Frideres, currently the chief operating officer, will become chief of staff effective December 1.

“Taryn has played a central role in my administration over the last two years as chief operating officer, and I’m thrilled for her to become my chief of staff,” said Gov. Reynolds. “Her experience at the federal level and her proven leadership skills will be a great asset as I begin my second full term.”

“No one works harder for the people of Iowa than Gov. Reynolds,” said Frideres, “so it’s an honor to be selected for this role to help implement the Governor’s bold vision for the state.”

“Working for Gov. Reynolds the last four years has been the role of a lifetime,” said Craig Gongol. “I’m proud of what we’ve accomplished, even among the challenges that were thrown at us. I’m thankful to the Governor for the opportunity, and I’m grateful to my staff for their hard work and dedication.”

“The chief of staff position is incredibly demanding in normal times, but when you add a worldwide pandemic, a derecho, floods, and more on top of it, it is all consuming. Sara devoted herself to this state and helped me usher in a bold agenda that will pay dividends for years to come,” Gov. Reynolds said. “I’m so grateful for her leadership and am excited for what’s to come.”

Frideres Background
Before becoming chief operating officer, Frideres served as a trusted senior policy advisor for more than a decade as a private sector lawyer, U.S. Senate staffer, and U.S. State Department official. Immediately before joining the Governor’s Office in January 2021, Taryn served as Deputy to the U.S. Ambassador to the United Nations, leading the Ambassador’s Washington DC office and serving as a liaison to the White House, State Department, and Congress. Before that, Taryn served as Senior Advisor to the Deputy Secretary of State and Special Advisor to the Director of the Office of Policy Planning. Prior to joining the State Department, she served as General Counsel to Iowa Senator Joni Ernst. A Denison, Iowa native, Taryn is a summa cum laude graduate of Drake University and holds a law degree, with high distinction, from the University of Iowa College of Law.