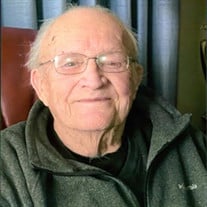 Visitation with viewing will be held one hour prior to Dick’s service at the funeral home on Thursday.
Should friends desire, memorials may be left in Dick’s name to Hospice of North Iowa.

Following school Dick farmed with his parents. He joined the Army from 1951-1953 where he was a member of the 82nd Airborne in Fort Benning, Georgia.

During this time he married Gertrude Rose Lewis on May 3, 1952 in Columbus, Georgia. To this union five children were born. After the Army, Dick worked for the Rock Island Line and Crouse Cartage company for 40 years until his retirement.

Dick loved his family, dancing at the Surf Ballroom in earlier days, reminiscing about the “Old Days”, new and old cars, and had a passion for biking.