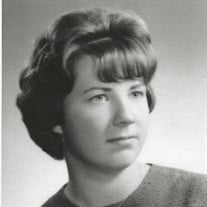 There will be a small graveside service for immediate family members only. In lieu of flowers, the family requests donations be made in Elaine’s honor to the Alzheimer’s Association or your local Humane Society / Animal Rescue League.

Elaine was born April 12, 1947, in Hampton, Iowa to William and Marie (Madsen) Lacey. She graduated from Meservey High School in 1965 and then attended Mankato Commercial College. In July 1966, she married Paul Ristau. They settled in Garner and raised their three children, Kent, Kristine, and Kimberly. After Paul passed away in 2000, she continued to run the family business, PAR Products until 2013.

Elaine is survived by her son, Kent and his wife, Christine of Nevada, with their children, Lance (Rebekka) Harding, Leisha, Logan, and Layne; daughter, Kristine Ristau-Lee of Cedar Falls and her sons, Matthew, Jacob, and Jerad (Sydney); daughter Kimberly Lubbert and her husband, Jeremy of Grundy Center, with their children, Hope and Holly; great-grandchildren Kara, Samuel, and Leia Harding; sisters Dorothy (Henry) Gerdes, Leola Nedved, Norma Gerdes; brothers Roger (Gail) Lacey and Ron (Carol) Lacey; and many nieces and nephews.