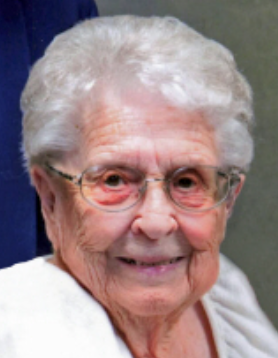 Funeral services will be held at 10:30 a.m., Wednesday, August 17, 2022, at Zion Evangelical and Reformed Church in Garner with Rev. Brian Lund officiating. Doris and Dean will be together for the last time on August 17th which is the day of their 75th wedding anniversary. Burial will be in Concord Township Cemetery.

Visitation will be from 5 to 7 p.m., Tuesday, August 16, 2022, at Zion Evangelical and Reformed Church and will continue one hour prior to services at the church.

Doris LaBonna Goll, the daughter of William and Magdalena (Haes) Ziesmer, was born August 2, 1926, in Garner. She was baptized and confirmed at St. Paul’s Lutheran Church in Garner. Doris graduated from Garner High School in 1944. During high school she placed second in the nation at a Flag Twirling Contest at Soldier’s Field in Chicago. After high school she moved to Seattle where she worked at the Navy depot. She then returned to Garner and worked at the Hancock County Auditor’s office. On August 17, 1947, she was married to Dean Goll at St. Paul’s Lutheran Church in Garner. They lived in Garner for a brief time while Dean was employed in the trucking business. IN 1955, they moved to a farm on the northwest side of Garner and in 1965 to a farm east of Garner where they raised their family. Doris was also employed as a secretary for the Hancock County Assessor’s office for several years. In 1999 Doris and Dean moved into town. The past five years she resided at Concord Care Center. Doris enjoyed her family, baking, canning, golfing and bowling.

She was an active member of Zion Evangelical and Reformed Church, Zion Women’s Fellowship, sang in the church choir and belonged to the Garner American Legion Auxiliary.