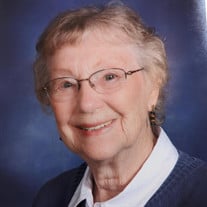 God took Marion Josephine Richards to be with Him on Saturday, July 9, 2022, reuniting her with John, her beloved husband for 52 years, and dear son, Scott.

Marion was born June 7th, 1931 to Fred and Josephine Vergenz in Watertown, WI. She was the youngest of three children, with two older brothers, Fred Jr. “Fritz” and Robert. The whole clan affectionately referred to her as “Babe”

After graduating from Watertown High School, she was attending St. Mary’s School of nursing in Rochester, MN when she met the love of her life, John Richards. They were married soon thereafter in 1951.

They didn’t waste any time starting a family, having three sons in three years, and another son five years later. Talk about having her hands full! Being a Mother and housewife truly was a full time job with plenty of overtime; constantly cleaning, cooking, doing laundry, sewing…A sock box full of those in need of darning was something to do to unwind at the end of the day while watching the evening news.

She and John moved the family from Adel, IA to Mason City in 1962, where her boys all attended St. Joseph’s Catholic School and John worked at All State and later Iowa Kemper Insurance Companies. Later on, as the kids grew older, she entered the workforce, taking a job at Raizes Department Store for 11 years until they closed their doors in 1980. From there she went to G. A. Larson for 14 years until her retirement in 1996.

For fun Marion and John enjoyed square dancing and their card club, where she always had the loudest laugh in the room. Later on they would travel to every state in the lower 48, and were always down for a picnic by the water.

She was preceded in death by her husband, John; son, Scott Lawrence-Richards; and brothers, Fritz and Bob.

Marion’s family will greet relatives and friends Wednesday morning from 9:30 until 11:00am at St. Joseph Catholic Church.