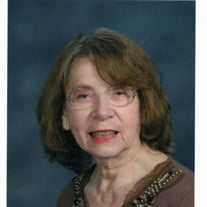 Elizabeth Ann (Bakke) Francis, 91, passed away peacefully of natural causes on July 7, 2022, at Benedictine Living Community in New Brighton, Minnesota. Liz was in the company of family at the time of her passing. A funeral service will be held on Friday, July 15, 2022, at 12:30 p.m. at Zion Lutheran Church, 112 N. 4th St., Clear Lake, Iowa. Visitation will be held prior to the service from 11:00 to 12:30 at Zion. Interment will occur at Memorial Park Cemetery in Mason City the same day.

Liz was born on April 30, 1931, in Forest City, Iowa, to Milo and Inger Bakke. The eldest of five sisters, she grew up in Lake Mills, Iowa, and graduated from Lake Mills High School. She met James Francis while working at the University of Minnesota. The two were married in Lake Mills in 1954, a union that lasted over 51 years until James’s death in 2005. They were blessed with three children – Robert, Jamie, and James.

The couple settled in Clear Lake in 1977, after living in Ames, Mason City, and Ankeny. Elizabeth was employed as a secretary with the Industrial Arts Department at Iowa State University, Boatman’s Bank (Bank of America) in Mason City, and the Meredith Willson Museum in Mason City.

Liz was an active member of her church congregations throughout her life, singing in the choirs at Trinity Lutheran, St. Paul Lutheran, and finally Zion Lutheran in Clear Lake. She also played clarinet in the Clear Lake Municipal Band, sang solos and duets at various community events, and inspired her children and grandchildren at the piano. She took in many great concerts at the Surf Ballroom. Wherever there was music, Liz would be found there, as a participant or an appreciative listener. At home, she enjoyed all types of music – classical, church hymns, choral compositions, patriotic songs, big band, rock and roll – and was known to spontaneously break into song anywhere, lightening the world around her with the pure tone of her voice.

She loved to talk about life with her sisters and cousins, her childhood and family in Decorah and Lake Mills, and performances she’d attended in Minneapolis and Ames. Liz also enjoyed the movies and seemed able to recount details of every movie star from Hollywood’s classic era, especially her favorite, Shirley Temple. Dedicated to her family, she delighted in each new child, grandchild, and great-grandchild. All who knew her were touched by her gentle manner, her sweetness, and an inner joy, unique to her, that brightened your day.

Liz is preceded in death by her husband; her parents; and her sisters Martha Skellenger, Alice Solum, and Mary Lyon.