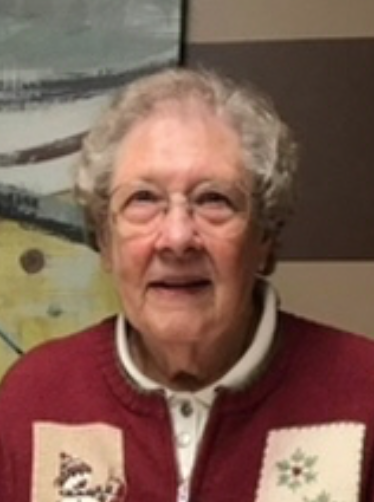 Marian Mae Smedsrud, 93, of Mason City, IA formerly of Waukon, passed away Sunday May 8, 2022 at MercyOne Medical Center – North Iowa. Memorial services will be held at 10:30 AM Monday May 16, 2022 at the St. John’s Lutheran Church, Waukon, IA, with Pastor Bryan Robertson officiating. Inurnment will follow in the Oakland Cemetery, Waukon, IA. Visitation will be held one hour prior to services Monday at the church. Memorials may be directed to the charity of one’s choice.

Marian Mae Moyer Smedsrud was born October 16, 1928 in Cedar Falls, IA the daughter of William and Minnie (Hansmeier) Moyer. She was baptized in Cedar Falls on February 10, 1929 and confirmed in Waukon at Zion Reformed Church (now Zion United Church of Christ) on March 29, 1942 by Rev. Frank E. Stucki. She graduated from Waukon High School on May 21, 1946.

Marian married Arden Smedsrud on January 21, 1950 at St. John’s Lutheran Church in Waukon with Arden’s brother, Pastor Gordon Smedsrud officiating and has been a member of St. John’s since then.

After graduation Marian worked at Northwestern Bell Telephone Company in Waukon as a telephone operator. She also worked for the Allamakee Community School as a secretary at the Junior High School before going to work for the Allamakee County Clerk of District Court, retiring in 1996 as a Deputy Clerk.

Marian was preceded in death by her husband Arden, who died June 20, 1976, her parents, a brother, Donald (Rita) Moyer and a niece, Ellen Moyer Gleason.