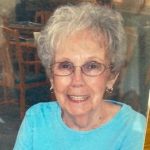 Carol M. Morrow, 82, passed away on December 3, 2021, in Fishers, Indiana, following a brief illness. Carol was born on September 11, 1939, in Ruthven, Iowa, to John D. and Venita A. (Hansen) Westergard and was the youngest of eleven children. She was baptized and confirmed in the Lutheran faith. Carol loved her parents, siblings, and living life on a farm, even if it meant a lot of hard work.

Carol graduated from Ruthven High School in 1958. Shortly after, she married Stanley D. Morrow at the Little Brown Church in Nashua, Iowa, and together they had two daughters. She worked for many years as a bookkeeper at the Farmer’s Coop Elevator in Spencer, Iowa, and found the work fulfilling and the people enjoyable.

In her later years, Carol moved to an apartment in Spirit Lake, Iowa, where she found a community that provided rich friendships, and activities that brought her joy. She especially liked participating in potluck dinners, puzzles, bingo, and playing cards. Her love of baking never diminished, and her freezer was always filled with homemade goodies.