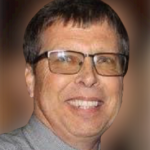 He received his education and graduated from Spirit Lake High School in 1978.

On April 30, 1983, he was united in marriage to Jolene Cushman at St. Patrick’s Catholic Church in Estherville. Gerry spent 40+ years working at the Superior Elevator. For hobbies, he enjoyed grilling, going for rides with his pets, listening to classic rock, car shows, trains, Green Bay Packers, Iowa Hawkeyes, coffee hour with the farmers, watching sports, and most important was spending time with his children.

He was a member of St. Patrick’s Catholic Church and the Knights of Columbus.

Left to cherish Gerry’s memory are his wife, Jolene; his children, Allie (Kevin) Lutz; Sarah Lutz and Tyler Lutz; and his aunt, Rosemary Wilson. He is also survived by several nieces, nephews and great nieces and nephews.

He has been preceded in death by his parents, Art and Beverly (Schenck) Lutz, sister, Wendy Schrieber, mother-in-law Mary (Mike) Cushman-Calhan and father-in-law Howard Cushman.