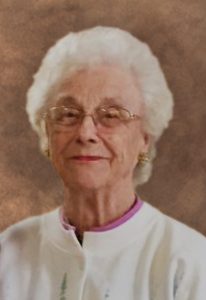 A funeral service for Eunice E. Blake, formerly of Lu Verne, will be held Thursday, December 30th, 2021, at 1:30 PM at Oakcrest Funeral Services of Algona with Pastor Olympia J. Marcos officiating. Burial will be in the Green Mountain Cemetery in Green Mountain, IA. Her family will greet friends one hour prior to the service at the funeral home on Thursday.

Eunice was born on April 13, 1925, to Harold (Bud) and Bessie (Furney) Langbehn near Deep River, Iowa. She graduated from the Green Mountain, Iowa high school in 1942. She married Allen J. Blake October 15, 1944, in Marshalltown, Iowa.
Eunice, Allen, and family lived in Rockford, Iowa for several years before moving to Lu Verne, Iowa, in 1955. They owned funeral homes in Lu Verne, Renwick, Corwith, Wesley, and Titonka until 1982, when the business was sold to Oakcrest Funeral Services.

She was a member of: Lu Verne United Methodist church, past president of the church’s women’s group, God’s Helpers Circle, Order of the Eastern Star, Past Matrons’ Club, Paradise Club, past president of the American Legion Auxiliary, and served for 28 years on the Lu Verne City Council. She loved to read, do crossword puzzles, needle work and shopping.

Eunice E. Blake passed away on Sunday, December 26, 2021, at the age of 96, at Kossuth Regional Health Center, Algona. She had been a resident of Good Samaritan Society in Algona, since 2017.

She was preceded in death by her husband Allen on December 13, 2020; her parents; and brother, John Langbehn.