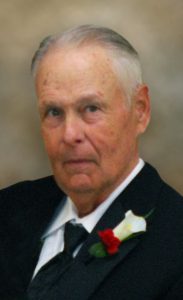 James Donalan Shillington was born August 9, 1944 at Station Annex in Fort Riley, Kansas, the son of Donalan and Helen (Coyne) Shillington. Jim grew up in Bancroft where he attended school and graduated from St. John’s Catholic High School in 1962.

He went on to attend barber school in Burlington where he completed the course of study in Barbering and Barber Science in 1963. Jim began his barbering career alongside his uncle Bob in Algona. Jim would relocate to Bancroft and continue barbering for many years.

Jim met Gloria Canaday and her son, Travis early in 1976. Jim and Gloria were married on November 19, 1976 in Bancroft. Surrounded by their family and friends, their daughter, Tina was born on July 28, 1979.

Jim’s health declined and he moved into Accura HealthCare of Bancroft Nursing Home in 2018. He had excellent health care providers as well as staff on site who truly cared about his well-being and became extended family.

Jim loved country music, mowing lawns, going for walks, helping at Shillington’s Hardware, going for car rides, drinking Diet Pepsi & iced tea but most of all being surrounded by his family. Jim was a polished, humble, selfless, giving, funny and resilient man. He was a member of the St. John’s Catholic Church in Bancroft and the Barber Association.

He is survived by two children, Travis (Nicole) Shillington of Algona and Tina (Brad) Ulfers of Fenton; four grandchildren, Laney, Lamorn, Amaya, and Cameron; two brothers and a sister, Mike (Neva) Shillington of New Orleans, LA, Steve (Carol) Shillington of Bancroft, and Donna (Greg) Schiefelbein of Buffalo Center; and many nieces and nephews.