This news story was published on March 1, 2020.
Advertise on NIT • Subscribe to NIT

National Player of the Year candidate Luka Garza recorded his team-leading 14th double-double of the season today versus Penn State (25 points, 17 rebounds). The junior center has surpassed 20 points in 14 consecutive league contests, a new school record. His game bests in rebounds (17) and blocks (4) were both one shy of a career best.

Iowa improved to 14-1 at home this season, winning its last 13 inside Carver-Hawkeye Arena.

Today was the Hawkeyes’ seventh win over an AP ranked opponent this season, the most by an Iowa team since 2006 (8).

Today was Iowa’s 20th victory of the 2019-20 season. The Hawkeyes have reached 20 wins six of the last eight seasons.

Iowa built its lead courtesy of a 14-2 scoring run spanning halves, including scoring the first seven points of the second half.

The Hawkeyes were credited with 22 assists on 28 field goals. Freshman Joe Toussaint dished out a personal-best eight assists.

Today was only the seventh time in program history that Iowa played on Leap Year Day.

Iowa will host Purdue in its home finale on Tuesday. Tipoff is set for 8 p.m. (CT) on Mediacom Court at Carver-Hawkeye Arena. 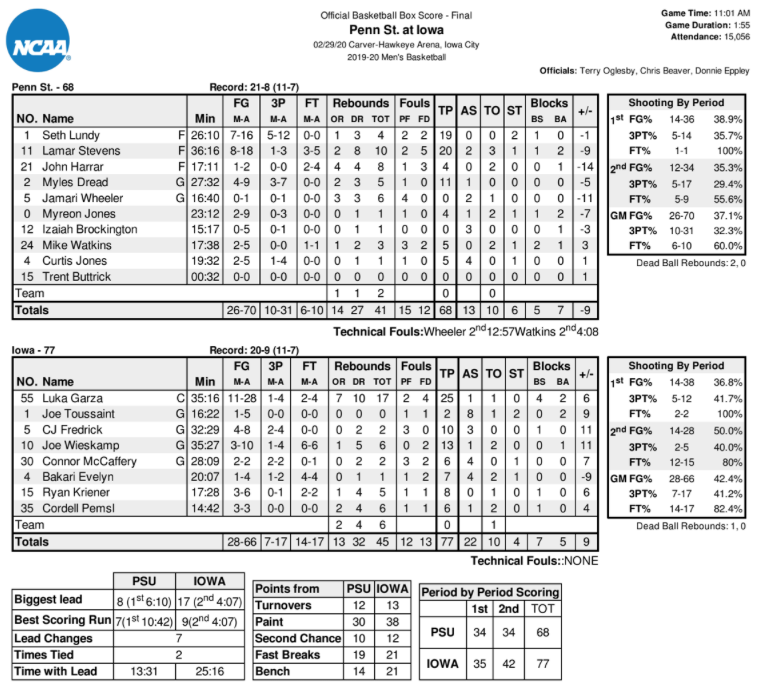