This news story was published on November 18, 2019.
Advertise on NIT • Subscribe to NIT

Sheila Rick, age 31, was arrested by Mason City police Friday morning, November 15, 2019 and brought to the Cerro Gordo county jail on a charge of felony third-offense operating while intoxicated and driving while barred. She remains in jail on bond, awaiting a hearing on November 25.

Rick escaped a prison sentence last October after Mason City police nabbed her for second-offense drunk driving in May of 2018. Her suspended 2-year prison sentence could be imposed if she’s found guilty in this new case, along with other severe penalties. She still owes the entire $2,861.75 in fines and fees a judge levied last year.

Back in 2017, Rick was accused of provided an underage person with so much booze they ended up in the hospital. That charge was later dropped. 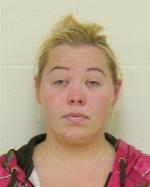