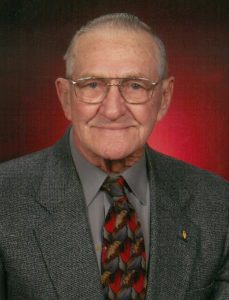 On June 13, 2018, at 3:43pm, Harvey Louis Riden, an incredible man, passed away peacefully, at the age of 95 at the Floyd County Medical Center in Charles City due to complications from a stroke.

A funeral service for Harvey Riden will be held at 10:30 a.m. Saturday, June 16, 2018 at Trinity United Methodist Church with Pastor Jim Beranek officiating. Burial will be at Sunnyside Memory Gardens in rural Charles City.

Visitation will be at Hauser Funeral Home Friday, June 15, 2018 from 5:00 to 7:00 p.m. and will continue one hour prior to the service at the church on Saturday.

Harvey Louis Riden was born on October 31, 1922 to Howard and Mary (Schilling) Riden of Clarksville, Iowa. He completed his education until 8th Grade and later finished his GED. Following 8th grade, he began to farm the Iowa countryside with his two brothers, Leslie and Floyd. The three Riden boys, when they weren’t farming, loved to make music together, with Harvey on mandolin. Harvey was a hardworking and faithful man, who touched the lives of so many people.

Harvey married his late wife of 69 years, Audrey “Maxine” on November 11, 1945 at Central Methodist Church. They had four children, Marcedes, Darlene, Keith, and Jeanine. The family lived and farmed in rural Charles City until 1975 when they sold the farm and moved to town. Harvey started “Riden Construction” and began shaping the town of Charles City with his skills as a carpenter, building each home on ‘Riden’ circle and remodeling many others throughout the town. While first and foremost he was a husband and a father, Harvey was also a humble and devoted servant first to God and then to his community. As an active member of Trinity United Methodist Church, Harvey was always trying to give back to his church family. When Harvey wasn’t working in his woodshop, his incredibly green thumb was outside tending his always impressive garden. His love for life and sense of humor made many fall in love with him. Up until his last few days Harvey was outside mowing his lawn and tending his garden at home. He had 95 wonderful years of life and each day he was given was a blessing to those who knew and loved him. He will be eternally missed.

In lieu of flowers, please send donations to the family of Harvey Riden, for the family to do something in his honor.