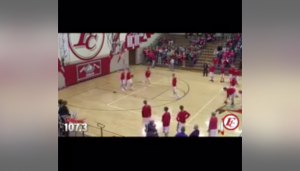 FOREST CITY – Two people are fired from their jobs at a Forest City radio station after allegedly denigrating Latino children playing in a basketball game during a radio broadcast.

Reportedly, Orin Harris and a producer at KIOW radio are fired after the on-air remarks about the Latino youths on November 28. A male voice – apparently Harris – and another female voice repeatedly made reference to the there young men who were playing for Eagle Grove against Forest City; they have Latino names. The announcers questioned why they were in town and then said “As Trump would say, go back where they came from.”

Harris, on a social media page, describes his employment as “Sales and Sports Announcer at KIOW Radio”.

The statement from KIOW reads as follows:

On Tuesday, November 28th, two employees of KIOW made comments that were insensitive, thoughtless and degrading to others. These comments were deplorable, and the staff and management of KIOW in no way condones or supports these comments.

These comments never aired on KIOW Radio. They did, however, appear on a video feed that appeared on a school website.

That night when we learned of these comments, we were in contact with the Eagle Grove School District and gathered information about the incident. On Thursday morning, November 30, a letter of apology was sent to school officials, along with details of our actions in regards to the two employees involved.

As a result, both employees have been fired from their positions with the station.

KIOW Radio has a long history of promoting and supporting student athletes, coaches and schools. As a company, we take great pride in spotlighting the great efforts of our local citizens, schools and communities, and we will demand that all company employees adhere to this policy.