RURAL CERRO GORDO COUNTY – A Hanlontown woman was caught drunk driving this weekend – at least her third such arrest.

A Cerro Gordo county deputy conducted a traffic stop at 12:26 AM on Sunday, October 8 near Fir Avenue and 310th Street.  After an investigation, the driver, 42-year-old Kelly Angel Kennedy of Hanlontown, was arrested on a charge of second-offense operating while intoxicated.  She was taken to the county jail, booked and son released pending a court date.

Kennedy was also cited for speeding during the stop.  She was caught drunk driving in Winnebago county in 2015 and Mason City in 2001, court records show. 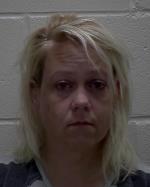