MASON CITY – A Charles City man is accused of burglary in Waverly and faces having his probation revoked for bringing drugs to the county jail.

Tristan G. Hillhouse, age 30 of Charles City, is accused by Waverly police of felony second-degree burglary after an alleged crime he committed there on April 30. He has been in the Bremer county jail up until Sunday afternoon, when he was shipped to the Cerro Gordo county jail to face a probation revocation hearing in connection to a 2015 deferred judgement he received for bringing marijuana to the county jail.

Hillhouse remains held in jail as he awaits a court appearance. He was guilty in May of 2014 of stealing $10 worth of merchandise at Mills Fleet Farm on March 2, 2014. 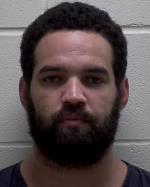