This news story was published on July 8, 2017.
Advertise on NIT • Subscribe to NIT

ALLISON, IOWA – A Parkersburg man has been sent to prison for sexual abuse.

Andrew Faulkner, age 37 of Parkersburg, committed sexual abuse crimes back in January of 2015, a judge found in July. As a result, he was sentenced on two counts of third-degree sexual abuse to ten years in prison, each, to be served consecutively. He will be listed not he state’s sex offender registry for the rest of his life, once he leaves prison.

Faulkner was charged by Parkersburg police in January of this year with these crimes, four counts total, of third-degree sexual abuse. Two counts were dropped. 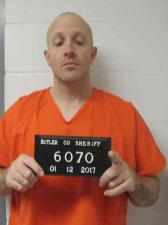