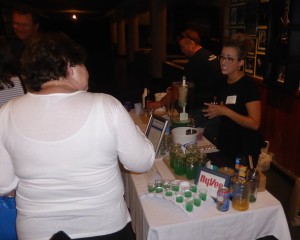 The “Hamptons of Mason City” – as those in attendance gleefully agreed Clear Lake has become – chose the “Clear Lake Breezer”. The delicious blue drink was picked from at least eight entries in the Signature Cocktail Competition, which was organized by the Clear Lake Chamber of Commerce.  It was a free event for the public to attend, with drink samples, prizes, snacks and a free band, later in the evening. 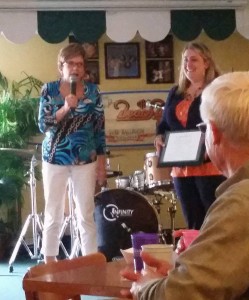 Other entries went by colorful names such as “The Lady of the Lake”, “Pub Punch” and “Cosmo Waves”.

The “Clear Lake Breezer” was concocted by contest winner Diana Symonds, a Realtor with the McQuaid Agency. She said she came up with the drink recipe after many experiments.

Diana said the recipe for the drink is: 1 shot of blue Curacao, 1 ounce Sprite, 4 oz. lemonade, and 1 shot of Malibu Carribean Rum. The glass can be rimmed with sugar, she offered.

The drink is now, for the moment, Clear lake’s signature cocktail.