MASON CITY – A long-time Mason City resident is charged with two counts of delivery of methamphetamine, and also served a jail sentence for driving while barred.

Adam Torres, age 44 of Mason City, pled guilty on November 14 to driving while barred. Torres was sentenced to seven days in jail and ordered to pay $1,039.75 in court costs and fees.

In addition, the Cerro Gordo Sheriff’s Office brought two charges of felony delivery of methamphetamine against Torres on November 4 and a warrant was issued for his arrest. A deputy caught up with him on November 10 and he was brought to jail, and has been held there as he served his jail term on the driving while barred charge.

Torres await a December 8 arraignment on the felony drug charges. 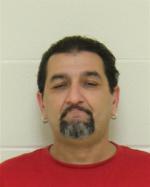