MASON CITY – A deputy made a traffic stop early Friday and caught an armed felon with illegal drugs.

Dustin Nicholas Barnes, age 23 of Rockwell, was stopped driving a car in Mason City near 12th Street and North Adams Avenue at about 12:18 AM Friday morning. During the course of the traffic stop and subsequent investigation, Barnes was discovered to be in possession of a hand gun, drugs and drug paraphernalia. He also had no proof of insurance.

Barnes was arrested and his vehicle was impounded. He was charged with driving under suspension, carrying weapons, second offense possession of controlled substance, possession of drug paraphernalia, and no insurance.

Barnes is a convicted felon, accused of numerous drug, driving and theft crimes. He also escaped from Beje Clark in 2011. 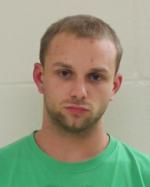