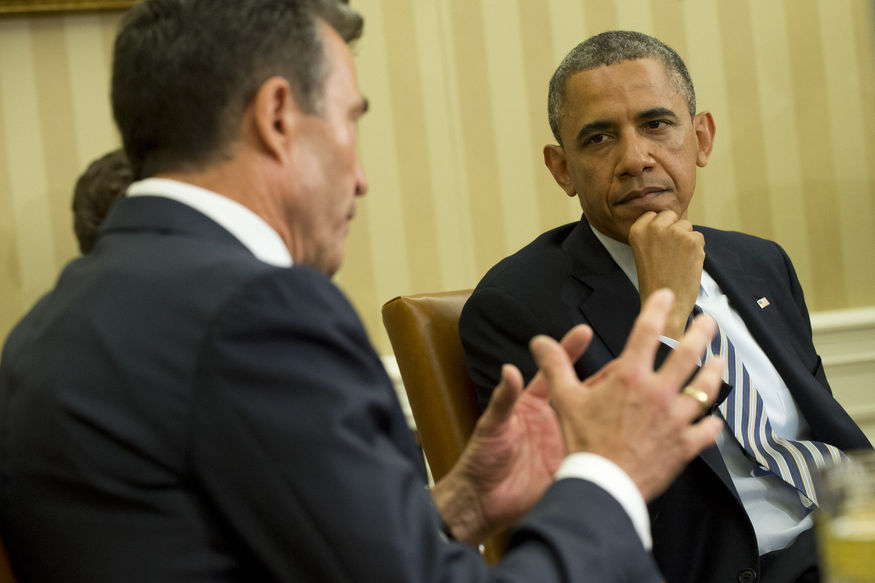 “We’ve seen great progress in the Afghan National Security Forces. We want to continue that progress,” Obama said Friday in a statement with NATO Secretary-General Anders Fogh Rasmussen in Washington. “And central to that will be those NATO members, who are contributing, continuing to work effectively with their Afghan counterparts so that moving into next year we have a successful Afghan election and we continue transition until the end of 2014 whereby our combat roles will be completed.”

Obama said he and Rasmussen discussed plans for the next 18 months and steps that could be taken after NATO troops leave Afghanistan in December 2014 “to ensure that Afghan security forces are effective and control their own borders” while NATO can be assured that Afghanistan won’t be used as a base for terrorism.

To that end, Obama said, he and Rasmussen agreed to conduct a NATO summit next year, although no other details were announced.

“Our goal is in sight,” Rasmussen said. “Soon, we will reach an important milestone. The Afghans will take the lead for security across the country. Our troops will move into a support role.”

Obama and Afghan President Hamid Karzai agreed in January to accelerate the handover of combat operations to Afghan forces from NATO by this spring, rather than summer, with NATO troops focus on training, advising and assisting their Afghan counterparts, but also fighting alongside as needed.

By the end of next year, the coalition’s mission will be completed, troops will return to their home countries and Afghan forces will be fully responsible for security, “but we will still be there to train, advise and assist,” Rasmussen said.

“And to that end, we are now preparing a training mission to be established from 2015,” he said. “It will be a very different mission — a non-combat mission with a significantly lower number of troops and trainers. So we are determinedly moving towards our goal: An Afghanistan that can stand on its own feet.”

But he assured Afghans that they wouldn’t be alone because “we are prepared for an enduring partnership with the Afghan people.”

Obama said he and Rasmussen discussed the need to keep improving NATO defense capabilities “in a new world with new threats.”

Rasmussen has taken the lead in discussions with NATO’s 28 members about how “we start building up greater and greater capacity and integration that requires burden-sharing on the part of all NATO members,” Obama said. “It means that, even during times of austerity, that we work smarter together to ensure that we can meet and are prepared for any threats that may arise, whether it is improving our joint surveillance capabilities or addressing new threats like cybersecurity.”

Libya also was discussed, Obama said, noting that the country now has a government that is in a transition process.

“And part of where we think we can be helpful is to ensure that a democratically elected Libyan government has the capacity to control its borders to ensure that it does not become a safe haven for terrorism,” Obama said. “And I think NATO has an important role to play on that front.”