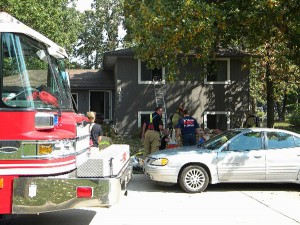 From the Mason City Fire Department –

MASON CITY – The Mason City Fire Department responded to an alarm for a house fire at 1008 15th Street N.E. on Sunday, August 26th that was reported by an 18 year-old occupant at 10:07a.m.

The house is owned by Doug Hershey.

The occupant noticed light smoke in the house and discovered a fire in a 3 year-old child’s bedroom. When he opened the door to the room he was met with smoke and flame. He took the 3 year-old to a neighbor’s house, notified dispatch, and returned to attempt to rescue family pets and extinguish the fire with a portable fire extinguisher. He was later transported Mercy Hospital for treatment of smoke inhalation.

The fire involved an infant’s crib in the bedroom, and was confined to this room. There was light smoke damage to the remainder of the home. Firefighters were on scene until 11:57 a.m.

Probable cause of the fire was a child playing with a cigarette lighter.

More on this story here.