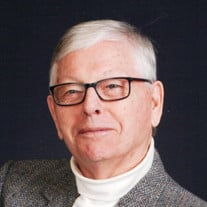 Robert Dale Christensen was born October 17, 1940, in Swaledale, the son of Aage Kjar and Johanna Louise (Wradislavski) Christensen. Robert was a graduate of Thornton High School in the class of 1959. After graduation he enlisted in the United States Army, later honorably discharged.

On July 3, 1970, Robert was united in marriage to Janet L. Sons at the Bethlehem Lutheran Church, Mason City; to this union one son was born.

Robert farmed his family farm, raising cattle until his retirement in 2002, when he and Janet moved to Clear Lake.

Robert enjoyed Duplicate bridge, reading Westerns, hunting and fishing, his greatest love was spending time with his beloved grandchildren. He was a member of Bethlehem Lutheran Church, Mason City, where he also taught Sunday school for 15 years; the American Legion and Thornton Farm Hands.

Robert is preceded in death by his parents and one brother Christian Christensen.