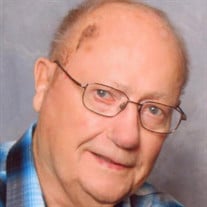 Jerry Richard Carolus, 86, of Hampton, Iowa, passed away Saturday, January 7, 2023, at MercyOne North Iowa Medical Center in Mason City. No services are planned at this time. Counsell Woodley Funeral Home and Cremation Services of Hampton is caring for Jerry and his family.

He was born July 20, 1936, to parents Henry and Julane (Osheim) Carolus. Jerry graduated from Clarion High School in 1955, and later that same year was united in marriage to Jean Chapman in Trenton, Missouri, on December 30. To this union, three children were born: Jay, Jerilyn, and Jaci.

Jerry worked as a salesman and manager for Scwann’s for 33 years and he loved every minute of it. He liked to have coffee with his friends every Saturday morning. In his free time, Jerry enjoyed golfing and fishing. He would golf locally in various groups and events, and would head north to Minnesota and Canada to fish. He also enjoyed going to watch car races, specifically dirt track racing.

He was preceded in death by his parents, his in-laws, his grandson Nathan Sinclair and his son-in-law Mike Sinclair.