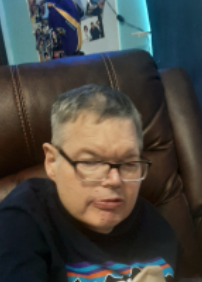 Larry Don Overturf, 65, of Sioux City, passed away unexpectedly on December 1, 2022. Funeral services will be held at 1:30 p.m. on Friday, December 9, 2022, at Meyer Brothers Morningside Chapel, 6200 Morningside Ave, Sioux City. Visitation will be held one hour prior to the service time. A graveside service will be held at 11 a.m. on Saturday, December 10, 2022, in Elmwood-St. Joseph Cemetery in Mason City. Memorials may be directed to the family of Larry Overturf.

Larry was born on August 10, 1957, in Mason City. He grew up and spent most of his life in Thornton. Larry graduated from the Mason City Community School District. Larry resided at the Eagle Grove Group Home, in Eagle Grove. He then moved to Opportunity Village in Clear Lake for several years. Larry lived at Heritage Care and Rehabilitation Center in Mason City prior to moving to Courage Homes in the fall of 2019.

Larry was very sociable and made friends wherever he went. He participated in Special Olympics and won many metals. Larry loved the Lord Jesus, enjoyed church and attended Promise Keeper events with his dad. Larry attended River Hills Church before covid and watched Sunnybrook Church on tv. He loved being with family.

Larry enjoyed the activities and family at Courage Homes and “Night to Shine” at Sunnybrook. Larry was an avid Minnesota Vikings and Twins fan. He liked watching Iowa Hawkeye football games. He loved music of any kind, listening to “Moose” on the radio and watching “Me TV”.

We will all remember Larry as “Strong and Faithful”.

Larry was preceded in death by his father Donald Overturf and brother Richard Overturf and grandparents Harry and Elaine Overturf.