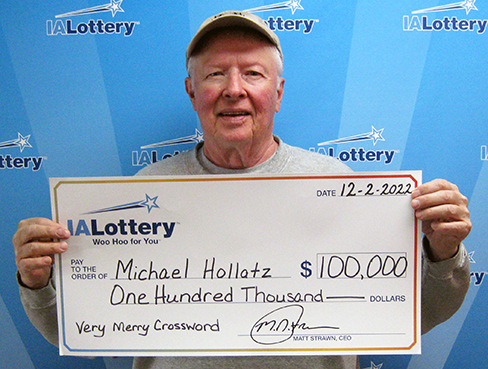 CLIVE, IOWA — A Hancock County man bought a lottery ticket on his way to a haircut and won a $100,000 prize.

CLIVE, IOWA — A Hancock County man bought a lottery ticket on his way to a haircut and won a $100,000 prize.

“I couldn’t even imagine winning it,” Michael Hollatz told officials on Friday as he claimed his prize at the lottery’s Mason City regional office. “I win $10 or $50 once in a while, but never this.”

Hollatz, 74, of Garner, won the fifth top prize in the Iowa Lottery’s “Very Merry Crossword” scratch game. He bought a couple of tickets in the game at Randy’s Neighborhood Market, 20 S. Fourth St. in Clear Lake.

“I didn’t scratch them until I got home,” he said. “I told my wife. She said she didn’t hardly believe it.”

Hollatz said he and his wife, Dee, plan to use part of their winnings to pay bills and share some with their grandchildren.

Very Merry Crossword is a $10 scratch game that features seven top prizes of $100,000, 15 prizes of $10,000 and overall odds of 1 in 3.29. For more information about this game and the number of prizes still available, visit ialottery.com.

Players can enter nonwinning holiday scratch tickets into the lottery’s Holiday Cash Bash Play It Again® promotion from now through 9:59 a.m. on Jan. 10. The promotion will award $355,000 in cash prizes, including a grand prize of $100,000. For rules and complete details, visit ialottery.com.

Last week, Anthony Moore of Nora Springs won a $100,000 prize in the Iowa Lottery’s “Hit It Big!” scratch game after buying a ticket at a local Casey’s.