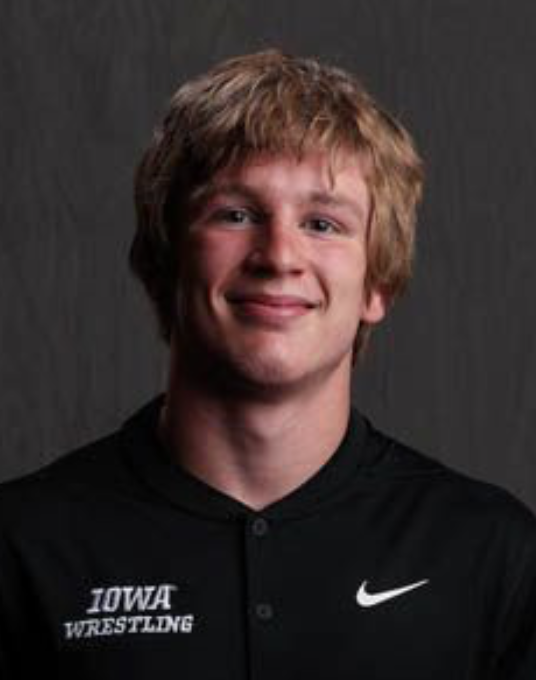 The Hawkeyes won 14 matches during the tournament, posting one second, three third and one fourth place finish.

Rhodes, a freshman from Mason City, was pinned by Brock Bobzien of Wisconsin RTC in the first round at 133 lbs. Rhodes then lost, 6-1, to Garrett Funk of UNI. (Photo: Jace Rhodes via hawkeyesports.com)

Freshman Kolby Franklin was the highest place winner, finishing as the runner up in the 197-pound bracket. Franklin fell to UNI’s Wyatt Voelker, 3-1, in the championship bout.

After falling in the quarterfinals, freshman Joel Jesuroga battled back, winning four straight matches to finish third at 149 pounds. Jesuroga majored James Edwards of the Iowa State Wrestling Club, 13-2, pinned unattached wrestler Colton Cahill in 1:47 and had back-to-back decisions, downing Wisconsin’s Aidan Medora, 2-1 in the first tiebreaker, and 3-2 over UNI’s Adam Allard. Jesuroga is 9-1 this season.

Freshman Aiden Riggins made his Hawkeye debut, going 3-1 in the 157-pound bracket to place third. Riggins had three decisions on the day, including a 7-3 win over Iowa State’s Andrew Huddleston in the third-place bout.

Freshmen heavyweights Bradley Hill and Gage Marty combined to win four matches in the 285-pound bracket. Hill had a 28-second fall over Wisconsin’s Jonah Schmidtke to advance to the third-place bout. The two Hawkeyes squared off with Marty winning in a 1:09 fall to place third.