Kris Murray recorded his fourth double-double in five games, reaching double-digit rebounds and points in the first 13:15 of the game. Murray finished the contest with 31 points and career bests in rebounds (20) and assists (4). Murray has netted 20+ points four of the last six contests.

The last time a Hawkeye pulled down 20 or more rebounds in a game was Kris’ brother Keegan versus N.C. Central on Nov. 16, 2021. Tonight’s 20-rebounding performance marks the 25th time in program history that the feat was accomplished.

Connor McCaffery posted his first career double-double (10 points; 10 rebounds). The 10 rebounds are a season best for the Hawkeye senior.

Tonight’s victory was Fran McCaffery’s No. 499 as a head coach.

Iowa improved to 2-1 all-time against the Yellow Jackets.

Tonight was the second of three games against ACC opponents over a span of 12 days (Clemson, Georgia Tech, Duke).

The Hawkeyes return to the hardwood on Tuesday, Dec. 6, versus Duke in the Jimmy V Classic in New York City. Tipoff is scheduled for approximately 8:30 p.m. (CT) at Madison Square Garden. 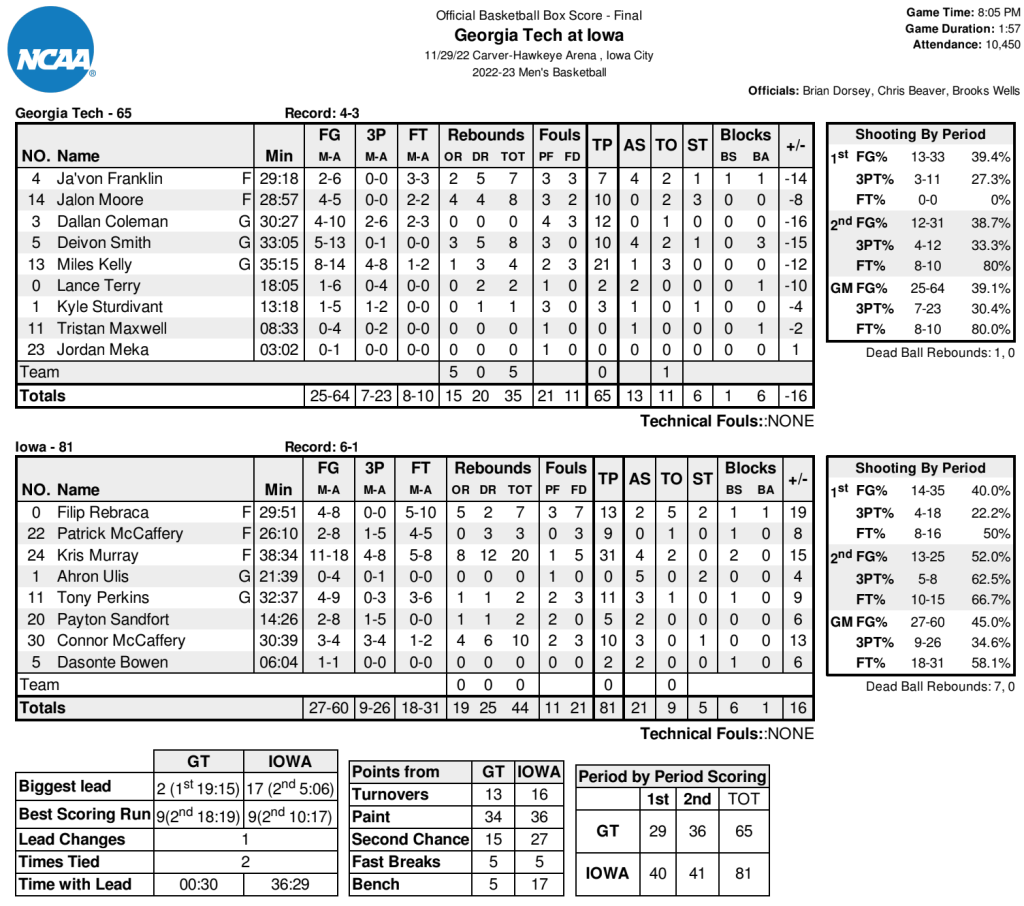 FRAN McCAFFERY: Yeah, I mean, he had two double-doubles down in Florida, so I wasn’t concerned with how he would respond. No, so I didn’t say a word to him.

FRAN McCAFFERY: Well, I thought the really impressive thing about the rebounding with Chris was six offensive rebounds in the first half were a big difference in this game. We were struggling shooting the ball, and he went back and got it six times. The other thing is a lot of guys can get 30, but very few people are going to get 20. Most guys that are getting 30 aren’t rebounding. So I think that’s impressive.

FRAN McCAFFERY: Yeah, he did, and that’s kind of what he does, but he settles everybody down. It was kind of a strange game. Some goofy turnovers and missed shots and missed free throws. They’re a hard team to guard. They’ve got multiple guys that are athletic, that go off the dribble, that can make shots. Whether we were in our press or man or zone, you need that one guy out there that’s kind of anchoring everything, and that’s what Connor does.

Again, four offensive rebounds, six defensive, and no turnovers. Takes care of business for us.

I took Payton Sandfort out of the starting lineup, and I hate doing that after a loss because I never want the message to be, oh, let’s blame it on Payton. We’re taking him out. That’s not what it was. I thought it would really help him, and he came in firing, which is what I want him to do, and he was moving without the ball. I needed to get him more minutes, and that’s on me. I’ll get him more minutes the next game.

I just — I don’t really say much to them. They were changing defenses. They were in a mixture of zones, so you’re going to typically in those situations end up with more threes than if they were in man-to-man.

FRAN McCAFFERY: Yeah, you know, but I think he was pressing a little bit in the starting lineup. Like I said, I feel really bad. I should have got him more playing time in the second half. But once it got to that one period of the game, I kind of stuck with that group to get home. Sometimes that happens. He’ll be fine.

FRAN McCAFFERY: Yeah, I think that’s a good point. A lot of times, especially when you’re shooting a lot of threes, you don’t have 21 assists, 27 buckets. I thought we moved it side to side, I thought we pass faked and drove it. We mixed our drives and our in-and-outs, and we were really looking for each other. That’s kind of who we are and that’s how we have to play.