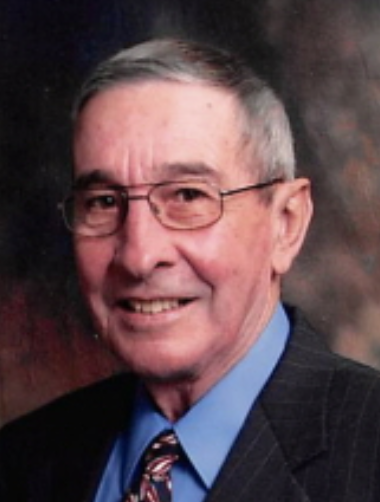 A memorial Mass for Maurice "Moe" Bormann, of Whittemore, will be held 10:30 am Wednesday, November 30, at Divine Mercy Parish - St. Michael's Catholic Church in Whittemore.

A memorial Mass for Maurice “Moe” Bormann, of Whittemore, will be held 10:30 am Wednesday, November 30, at Divine Mercy Parish – St. Michael’s Catholic Church in Whittemore. The service will be live streamed on the Divine Mercy Parish You Tube page. Inurnment will take place at St. Michael’s Catholic Cemetery in Whittemore. Military rites will be conducted by the Whittemore American Legion Seely – Walsh Post #425. A prayer service will be conducted at 4:30 pm Tuesday at St. Michael’s Church Hall in Whittemore, followed by visitation until 7:00 pm. In lieu of flowers, memorial contributions may be directed to the Donald J. Whittemore Foundation.

Maurice James, son of Charles and Anna (Hartman) Bormann, was born February 20, 1935, in Whittemore, Iowa. He graduated from the Presentation Academy in Whittemore in 1952. Moe served in the United States Navy from 1956 – 1957 and was a lifetime member of the Seely-Walsh American Legion in Whittemore. He married Marlene Bonnstetter and six children were born to this union. Marlene passed away in 1979. In 1981 Moe was united in marriage to Eileen Kollasch, who had three children of her own, and they combined the two families into one.

Moe worked for Wilson Construction Company in Le Mars and Dunlap for six years. In 1960 Moe began farming with his brothers Rich and Vern and did carpentry work on the side. He helped build Bishop Garrigan High School in Algona. Moe was also a DeKalb seed salesman for nearly 10 years. He was a member of St. Michael’s Catholic Church in Whittemore. He loved to play cards and almost always seemed to win. Moe also enjoyed golfing. He and Eileen played in many couples tournaments together. They also traveled together and spent time in the Ozarks and Arizona. Moe enjoyed farming, gardening and canning. He was famous for his pickles and cherry bounce. The grandchildren loved to get tractor rides with Grandpa. Moe was a very patient, laid back and fun-loving man full of one-liners. He passed away on Thanksgiving Day, Thursday, November 24, 2022, at the Algona Manor Care Center in Algona at the age of 87.