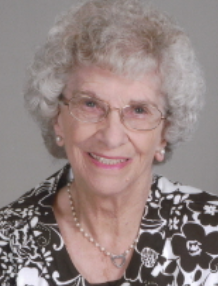 A funeral Mass for Mary Jones will be held at Immaculate Conception Catholic Church in Charles City on Saturday, November 26, 2022 at 10:30 a.m. with Reverend Tom Heathershaw officiating. Burial will be at Sunnyside Memory Gardens in rural Charles City.

Visitation will be from 5:00 to 7:00 p.m. on Friday, November 25, 2022 at Hauser Weishaar Funeral Home in Charles City with a Rosary being prayed beginning at 4:30 p.m. Visitation will continue one hour before the funeral Mass at the church on Saturday.

Mary Evelyn (Weiss) Jones, the daughter of George and Alice (Floerchinger) Weiss, was born on April 25, 1929 in Butler County, Iowa. She attended school in Greene and graduated from Greene High School in 1947. On July 25, 1953, Mary was united in marriage to Eugene Jones in Charles City.

Mary was a cook for different places in Charles City, including Brooks Restaurant, and worked with the Foster Grandparent Program for twenty years. She was a member of Immaculate Conception Catholic Church, St. Rose Circle, and the American Legion Auxiliary.

For many years, Mary gave out Memorial Day Poppies with the American Legion. She wrote many letters to her family and friends and never missed sending out a birthday or anniversary card. Family was the most important thing in Mary’s life, especially time spent with her grandchildren.

She was preceded in death by her parents, George and Alice Weiss; husband, Eugene; great-grandson, Joel Nedved; brothers, William and Robert Weiss; and sister, Rose Ebling.