AMES – No. 8 Iowa State (1-0) claimed the season-opening victory over Cleveland State (0-1) by a score of 87-54 on Monday. Three Cyclones hit double digits while two recorded double-doubles.

The Cyclones claimed the 34-point victory shooting 43.8 from the field with eight 3-pointers made.

Iowa State went out to a 36-point lead in the first half, led by Joens with 24 points. Joens dominated the first two periods, adding in nine rebounds, four assists, two blocks and a perfect 6-of-6 shooting from the charity stripe.

How it Happened
The first bucket of the season went to Soares while Cleveland State answered with a 3-pointer to begin the game. Iowa State then went out to a run of nine, capped with a three by Lexi Donarski to lead 11-3. The Cyclones held the Vikings to 2-of-8 shooting to hold the advantage of 18-6 with 4:52 to go in the first. After one played, ISU took a lead of 13, 24-11.

Joens made a jumper in the first minute of play of the second quarter to enter double digits. ISU shot three-straight buckets, including back-to-back triples by Joens and Fritz, to lead into the halfway point of the second with a score of 40-18. The scoring extended to 15-straight as Joens was on her way to hit the 20-point mark. With one second left in the half, Nyamer Diew stole the ball as Donarski shot up to the basket for the buzzer-beating layup on an Emily Ryan assist to enter halftime leading 56-20.

Fritz ended a 6-0 CSU run with a jumper as the second half got underway. Cleveland State found efficiency from the field, going 7-of-13 in the third while the score was put at 75-42 after three played.

Soares made a layup followed by a jumper to cross over 80 points for the Cyclones. Iowa State went on to total 87 to seal the win by a score of 87-54.

Player of the Game
Ashley Joens brought in 28 points, 11 rebounds, five assists and two blocks to open the 2022-23 season. Joens entered the day in a tie with Bridget Carleton for the sixth-most career 3-point field goals made with 255. Joens hit two from deep to now hold sole possession.

Up Next
No. 8 Iowa State continues its homestand hosting Southern this Thursday, Nov. 10 at 6:30 p.m. The game will be streamed on Big 12 Now on ESPN+ and tickets are available through the Iowa State Athletics Ticket Office. 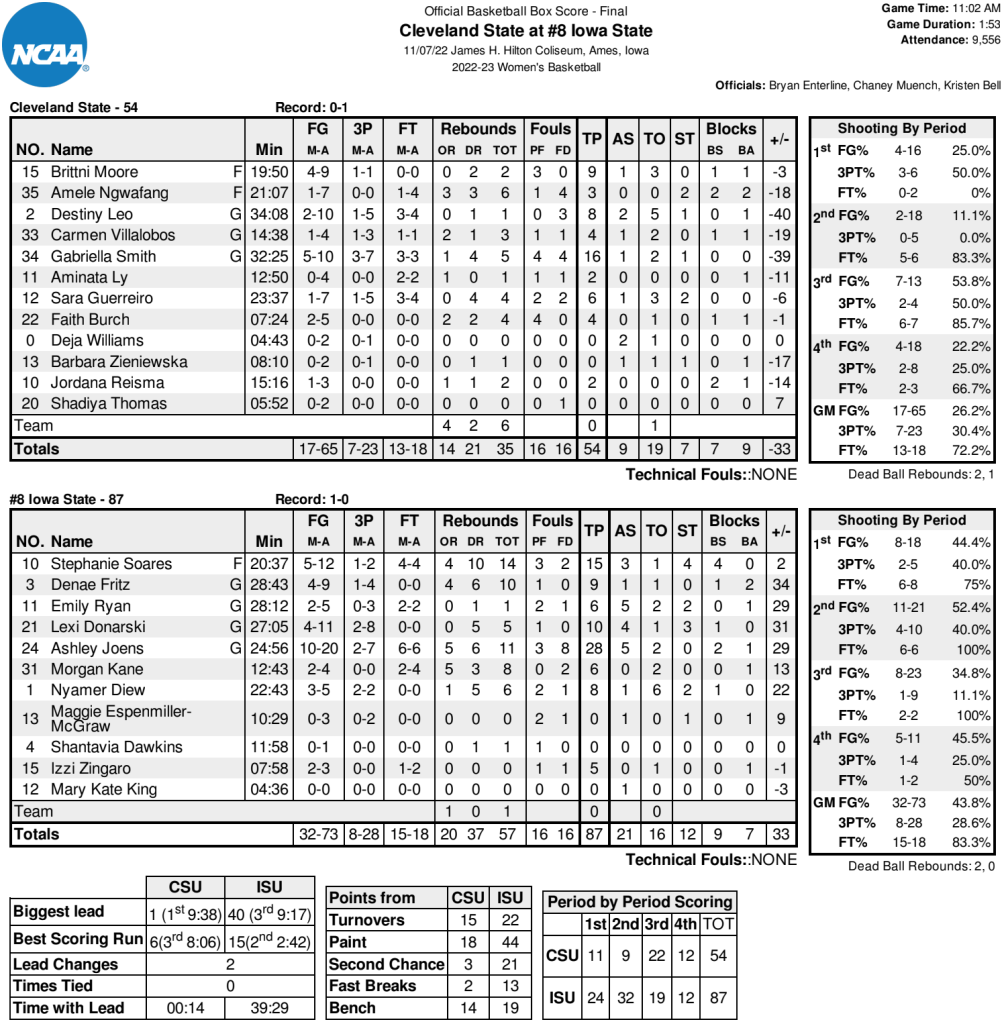