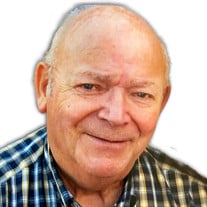 Celebration of Life Services will be held at 11:00 AM on Saturday, October 15, 2022 at Hogan-Bremer-Moore Colonial Chapel, 126 Third Street Northeast in Mason City with Reverend Kent Melcher officiating. A gathering of friends and family will be held from 9:30 AM until the time of the service.

Memorials may be given to the St. James Lutheran Church, Mason City, IA.

Arlyn, one of five children, was born on December 19, 1933 to Carl Thomas and Alvina (Tweed) Brosdahl of Fertile, IA. He attended Fertile Consolidated School and graduated in 1951.

After high school, Arlyn attended Waldorf College in Forest City and farmed with his father. He then enlisted in the Army, and was stationed in Germany for two years. He returned home to farm with his father, while also working for American Crystal Sugar Company. On April 17, 1960, Arlyn married Elaine Westcott of Manly, IA, the love of his life, in the Manly Bethlehem Lutheran Church. They were blessed with over 62 years together as husband and wife. He started work at Iowa Beef Packers, as a foreman. He developed a keen knowledge of meat grade and quality, which lead to the opening of his own meat market, Country Meats, in Manly, IA. Arlyn served as Mayor of Manly, IA for two years in the mid-seventies. Arlyn later worked for Continental Baking Company, selling and delivering Wonder Bread and Hostess products throughout north central Iowa.

Arlyn’s life could be summed up with one phrase – devotion to family and friends. His love for his wife, children, grandchildren, siblings, nieces, nephews and friends was extraordinary.

The family wishes to extend a sincere thanks to Good Shepherd Health Center, St. Croix Hospice, and appreciation for your love, friendship, support, and prayers.