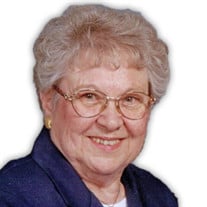 A Private Family Graveside Service will be held at a later date.

Memorials can be made to Good Shepherd Healthcare Center in Mason City, the Mason City Senior Center, or a charity of your choice.

Verna was born on December 26, 1928, in Kirkland Lake in Ontario, Canada, the daughter of Ernest and Ella (Wiita) Niemonen. She lived her first six months in Canada and then the family moved to the Upper Peninsula of Michigan. At the age of 10 years old Verna’s family moved to Seattle, WA. She was the oldest of six siblings, Ernest Jr., Rosalie, Faye, Sara, and Ella Jane. She was a graduate from Queen Anne’s High School. Four months after meeting on the dance floor, she married Leslie Dale Hildebrand on June 19, 1948, at the University Lutheran Church, Seattle, WA. Together the couple spent 69 happy years together. Verna joked about Dale being her second husband. As she married Les in Seattle and upon moving to Iowa discovered she was married to Dale. From the loving union three children were born, son, Steven, and twin daughters, Jeanne and Janet.

In the early 50s the couple moved to Iowa, living in Greene and Charles City, IA, where they spent the majority of their adult lives. Verna was a hardworking mother and farmwife; until the kids were older she began working for Oliver Tractors later White Farm as a bookkeeper. Verna
and Dale were faithful members of St. Peter Lutheran Church, Greene. After leaving the farm and moving to Charles City, they joined St. John’s Lutheran Church and owned an ice cream store in the mall. In 1997, they moved to Mason City and became active in the Senior Center, Wednesday dances, noon meals, Saturday morning coffee group and active members at Trinity Lutheran Church. She was a member of various knitting groups.

One of her favorite pastimes was socializing with friends whether it was playing cards or dancing.

Verna is preceded in death by her husband Dale Hildebrand; infant daughter, Janet; both of her parents and siblings.

Family would like to thank the staff of Good Shepherd Healthcare Center and Pastor Kent Mechler.