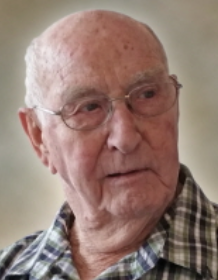 Edward Miller, 94, of Algona, peacefully passed away Wednesday, October 5, 2022, at Algona Manor in Algona. A visitation will be held 5:00 – 7:00 PM, Monday, October 10, at Oakcrest Funeral Home in Algona. A Knights of Columbus rosary will be recited at 7:00 PM. A funeral Mass will be 10:30 AM, Tuesday, October 11, at Divine Mercy Parish – St. Cecelia Catholic Church in Algona. Burial will take place at Calvary Cemetery in Algona. Military rites will be conducted by Lone Rock American Legion Kerr-Hammerstrom Post #577.

Edward was born the youngest of seven children to Leo and Sarah (Lillie)Miller on October 30, 1927, in Algona, Iowa. Siblings included Helen, Ruth, Andrew, Edna, Howard, and Cecelia. His mother Sarah, “Sadie”, passed away when he was 7 years old, and he was raised by his father and two sisters, Ruth and Helen. He completed his 8th grade education and then joined his father in farming, which was his passion and in his heart until the day he died.

Edward served in the United States Army from 1946 to 1947 and was trained as a medic. He served mainly at the Veterans hospital in Denver, Colorado. This training came in very handy later in life.

In 1950, Ed was set up on a blind date by friends. He married Ellen Elizabeth “Betty” Doerning on August 21, 1951. Together they farmed and raised six children and maintained a strong bond for one another. They had a family bean-walking team, worked side by side on the farm, enjoyed traveling the United States, and shared a love for the St. Joseph Family in Haiti. They loved sharing their home-grown produce and baked goods with friends and relatives.

Preceding Edward in death was the love of his life, Betty, in 1985, his oldest daughter, Marcia Boatwright in 2021, and a granddaughter, Jill Miller.

Left to cherish Edward’s life and memory are his children Marilyn Merrell, Norwalk, IA, Richard (Lynn) Miller, Glen (Lori) Miller and Darrell Miller, all of Algona and Janet Schaeffer, Ankeny, IA. Survivors also include son-in-law Steve Boatwright, and many grandchildren and great-grandchildren. Edward is also survived by his wife JoElla Miller and her sons Gene, Al, Lynn and Gary Miller and their families. Ryan Miller preceded him in death.

Memorial gifts may be made to St. Joseph Family, Haiti or Water for Haiti.