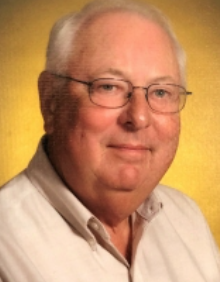 Will Hubka, of Cresco, Iowa passed away at Gundersen Lutheran Hospital, LaCrosse, WI on September 23, 2022.

Wilmer George “Will” Hubka was born April 07, 1938 in Cresco, Iowa to Robert and Georgina (Vopava) Hubka. On November 26, 1960 he was united in marriage to Loraine Bouska at Assumption Church, Cresco, Iowa. Will graduated from Crestwood High school in 1956.

Following graduation Will worked for Rath Packing. Riehle Decorating, Bartlett Electric and Cresco Skelgas. In 1974 he became self- employed as Will’s Electric until 1978 when he went to work for Hawkeye Tri County Electric Cooperative. He retired from the Co-op as Members Service Manager in 2000.

Will had a lifelong love of the outdoors. He started fishing with his Grandpa Charlie as a young man and continued all his life, along with hunting. He played a mean game of euchre. The birds were enjoyed and ate well at the Hubka place. After retirement he took up golf, but never had the chance to make a hole in one.

It was always a challenge to take something junk and repair it. The phone only had to ring and he was ready to help a friend. Will was a long standing member of the Cresco Wildlife Club.

Will is survived by his wife, Loraine of Cresco, Iowa and several nieces and nephews. He was preceded in death by his parents and his three brothers; Victor, Arlyn and Ronald.

In lieu of flowers, consider a donation to Notre Dame Church, Cresco Wildlife Club, Dollars for Scholars or a local charity of your choice.