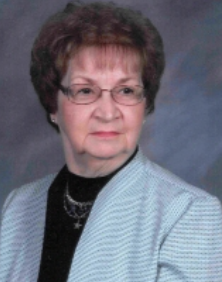 Wilma Muller, 93, of Algona, died Friday, September 16, 2022, at Good Samaritan Society in Algona, surrounded by loved ones. A funeral Mass will be held 10:30 AM Wednesday, September 21, at Divine Mercy Parish – St. Cecelia Catholic Church in Algona. Burial will follow at St. Michael Cemetery in Whittemore. Visitation will be 9:00 – 10:00 AM Wednesday at Oakcrest Funeral Services in Algona.

Wilma Clara Muller, the daughter of Elmer and Mary (Matheis) Kollasch, was born in Bancroft, Iowa on July 25, 1929. She grew up in the Bancroft, Swea City and Ledyard area. After graduating from Ledyard High School, she worked in Algona, Iowa, Fairmont, Minnesota and Phoenix, Arizona. In 1954 she married Orville Muller from Whittemore, Iowa. The couple farmed near Whittemore and, after 1972, were partners in Muller-Eischen Implement, KEMCO Tire and Wine and Spirits Shoppe in Algona. They moved to Algona in 1977 where Wilma was a member of St. Cecelia Parish and New Dimensions. She also valued her hours spent in the Adoration Chapel. They were former members of St. Michael Parish in Whittemore.

Wilma and Orville enjoyed raising their children on the family farm. She enjoyed gardening, playing cards, dancing and anything that involved spending time with her children and grandchildren. They also enjoyed traveling in the U.S. and internationally.