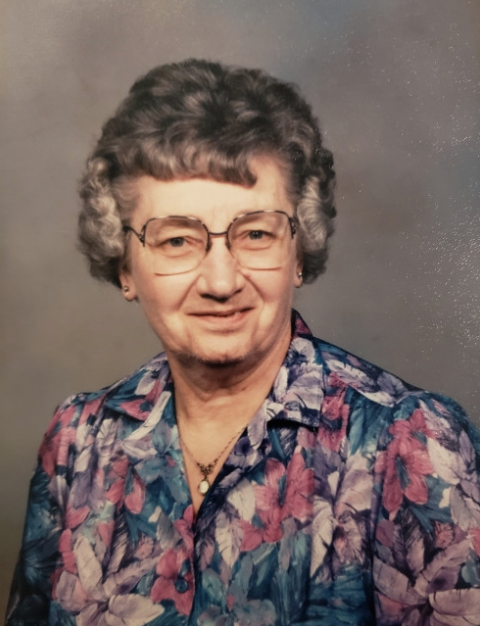 Ruth Marie (Hoyt) Clingerman of Eldora passed away Monday, August 22, 2022, at Eldora Specialty Care in Eldora while under the care of Iowa Hospice. A Visitation will be held from 4:00pm to 6:00pm on Thursday, September 1, 2022, at Abels Funeral Home (Creps Chapel) in Eldora, Iowa. A funeral service will be held at 10:30am on Friday, September 2, 2022, at the First Baptist Church in Eldora, Iowa. Ruth will be laid to rest in the Eldora cemetery.

Ruth was one of 4 children. She was born on September 9, 1926, the eldest daughter of Harvey and Sibyl (Reece) Hoyt in Tipton Township. Ruth attended country school at Tipton #2 (Meeker) for 8 years, Owasa for 2 years, graduating with the Eldora High School Class of 1944. Further Business classes were also taken in Marshalltown, Iowa.

She worked in the Hardin County Treasurer’s Office for 2 years prior to marriage, and various part-time jobs thereafter, notably with the Eldora Flower Shop and for many years with Longenecker’s Income Tax Service.

Ruth was a longtime active member of Eldora First Baptist Church, helping for years in the Nursery and arranged the altar flowers almost every Sunday for decades. She exhibited floral arrangements, knitted and crocheted creations at the Hardin and some Marshall County fairs winning many blue ribbons; was also involved with the Eldora Garden Club when it was active.

Ruth is survived by her sister, Alice Williams of New Providence, her 4 children, 4 grandchildren, 8 great-grandchildren, brother-in-law Jack Crosser of Steamboat Rock and numerous nieces and nephews. In lieu of flowers, donations may be made in memory of Ruth Clingerman to a charity of your choice.