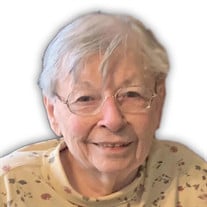 Jeanette Diekhuis, 91, of Clear Lake and formerly of Mason City, passed away Thursday, August 11, 2022 at the IOOF Home in Mason City.

A graveside service will follow at 1:30 pm at the Concord Cemetery in Garner.

The daughter of Ivan and Esther (Goozey) Richardson, Jeanette was born on September 13, 1930 in Britt. She was the youngest of four and the only daughter born unto Ivan and Esther. Following the unexpected death of her mother, Jeanette went to live with her grandmother, Janett Goozey, in Stilson, at the age of two.

Jeanette graduated from Britt High School and then moved to Forest City where she lived with her aunt and uncle and worked at the local Five and Dime.

On July 15, 1956 she was united in marriage to Harbert Diekhuis in Garner and together they were blessed with four children and nearly 50 years of marriage before Harbert’s passing in 2004.

In 1969 Jeanette and Harbert moved to an acreage outside of Mason City where they raised their children, Martha, David, Dennis, and Mary. In 1984 the couple moved into Mason City where Jeanette spent countless hours with her grandchildren while their parents were at work.

In 2000 Jeanette and Harbert moved to Clear Lake.

Jeanette will be remembered fondly by family and friends for her incredible baked goods. Each birthday was celebrated with a birthday cake made by Mom and Grandma, and no one will forget her brownies and angel food cake.

Jeanette enjoyed reading and watching mysteries on tv. She also loved day trips with her children to visit her brothers and in later years liked accompanying Dennis on service calls to get out of the house.