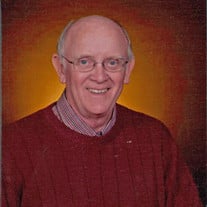 Marlin Duane Liljedahl, 85, of rural Northwood, IA, passed away on his birthday, Wednesday, July 20, 2022, at his home following a long battle with Idiopathic Pulmonary Fibrosis.

A memorial service will be held 11:00AM, Saturday, July 30, 2022 at First Lutheran Church in Northwood. A gathering of friends and family will be held one hour prior to the service at the church. on Saturday.

In lieu of flowers, the family would like memorial contributions to be made to any favorite organization in need of donations.
Marlin was born July 20, 1937, to John and Olga (Groe) Liljedahl. He graduated from Northwood High School in 1955. After high school, he proudly served his country in the U.S Army from 1955 to 1961; including 16 months in Korea. On April 24, 1965, Marlin was united in marriage to Carol Benson at Red Oak Grove Lutheran Church, rural Austin, MN. This union blessed the couple with two children, Heidi and Julie. After marriage, they started farming in Hartland Township, Worth County. In his early days of farming, Marlin also worked for Streater’s and Fountain Industries in Albert Lea. He retired from farming after he turned 75. Aside from working on the farm, he loved traveling, especially to Mexico and Arizona in the winter, spending time at the lake with his family in the summer, and getting together with the same group of friends he had since high school.

Marlin was a life-long member of the First Lutheran Church. He served on the Church Council as well as the Northwood Coop Elevator Board and Meals on Wheels Board. Marlin was proud of his faith, his farm, and his family. He loved every moment he got to spend with his family and especially loved seeing his grandchildren grow. Marlin loved attending their various sporting and musical activities. Many great memories were made celebrating birthdays and other family gatherings. Although Marlin lived a long and wonderful life; he will be dearly missed by all who knew and loved him. Countless memories of his infectious laugh, patience, and kindness will stay in the hearts of everyone who knew him best.