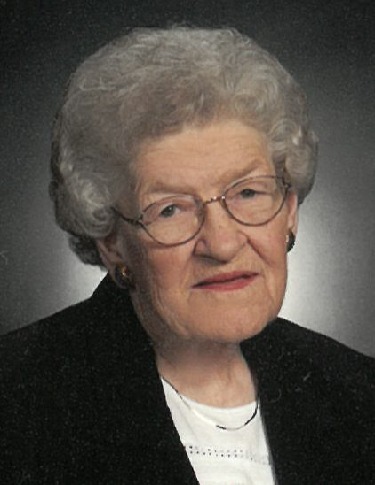 Georgia Louise Fangmeier was born February 22, 1927, in Waverly, Iowa, the daughter of Ernest and Louise (Dietrich) Lampe. She was baptized and confirmed at St. Paul’s Lutheran Church in Waverly. Georgia graduated from Waverly High School School in 1945. Georgia married David Fangmeier on September 25, 1949 at St. Paul’s. They lived in Waverly and McGregor, moving to Osage in 1957. Georgia worked at Tesch’s Drug Store as a bookkeeper and Mitchell County Farm Bureau until her retirement in 1997. She was a member of Our Savior’s Lutheran Church and a life member of the American Legion Auxiliary Post #278.

She is also survived by sisters, Darlene Plaehn and Carol Shaw; and numerous nieces and nephews.

She is preceded in death by her parents; husband, David and son-in-law, Steve Wohlfeil; brothers, Lester, Paul, Ernest and Dean; sisters, LuElla Dirks and Estel Bunger.