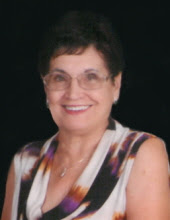 A funeral Mass for Liz Thomas will be held at 10:30 a.m. on Monday, June 6, 2022 at Immaculate Conception Catholic Church in Charles City with Reverend Tom Heathershaw officiating. Burial will be at Calvary Cemetery in Charles City.

Visitation will be from 3:00 to 5:00 p.m. on Sunday, June 5, 2022 at Hauser Weishaar Funeral Home in Charles City and will continue one hour before the funeral Mass at the church on Monday.

Elizabeth “Liz” Anna (Belden) Thomas, the daughter of Donald and Julia (Koenigs) Belden, was born May 29, 1940 in Adams, Minnesota and attended school in Austin, Minnesota. On December 1, 1956, she was united in marriage to the love of her life, Carlyle “Bill” Thomas at the Queen of Angels Catholic Church in Austin. The couple made their home in Charles City where they raised their family.

Liz was an Avon Representative for several years, and she made President’s Club almost every year. Her pride and joy was her family and Liz was happy to be at home raising her children. Liz’s truest love was for her husband, Bill (her family said that was the best birthday gift she could have received; to be in Heaven with him).

Liz was a member of Immaculate Conception Catholic Church where she was involved with circles and other church activities. She loved reading (especially on her digital reader) and crocheted for many years. Liz will be greatly missed by all those who loved her.