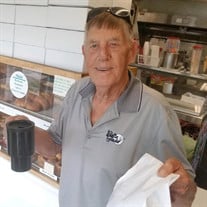 Visitation will begin at 1pm and continue until the service at the funeral chapel.

Robert D. Pedersen was born October 27, 1935 to Art and Mary (Johansen) Pedersen on the family farm near Swaledale, IA, later graduating from Clear Lake High School. He joined the 133 Infantry National Guard in Mason City and later the US Army in September of 1954. He served three years until his honorable discharge in September of 1957. Prior to his discharge he married Jeanette Christiansen on September 15, 1956. To this union four children were born: Lynn, Kathy, Jolene and Jarret. He farmed near Osage and Nora Springs from 1960 to 1970, later working at Winnebago Inc. in Forest City. Later he managed the Bakery Dept. for Fareway Stores Inc. in Mason City. From 1973 to 1979 he owned and operated Bob’s Beverage and Redemption and Bob’s Donut Castle. In 1981 Jeanette and he divorced. In 1982 Robert sold the business, and admitting he had a problem, received treatment in Forest City. Robert took pride in his sobriety, and was 40 years sober this year.

In December 1984 he married Marica Olson, and two families became one, including her three children: Rachael, Kevin and Keith. The couple later divorced in 1998. Through the early 80’s Robert delivered Winnebago motor homes all over the country, later working for Unicover Inc driving semi until 1994. In 1997 he returned to Winnebago, and went back to his love of travel, delivering motorhomes until October 2017.

Preceding him in death are his infant daughter, Donna; parents; three brothers: John, Ervin and Clarence; and a sister, Alma.